This happens because the throat is made of muscles. Normally when we are awake there is a resting tone in those muscles. When we fall asleep however the muscles go slightly floppy i.e. with reduced tone. The walls of the throat therefore start to fall then towards the middle. If the tonsils are enlarged then they start to fall in as well such that there is less room for air to flow for breathing. Initially this can cause snoring, but as the tonsils grow further they can block the breathing completely. This situation is made worse if the adenoids which is another gland sitting at the back of the nose is also enlarged.

Once the tonsils fall in to obstruct the breathing then the carbon dioxide in the child’s blood rises, and this is detected by the child’s brain stem, which then leads to the child waking up to some extent. As the child moves from being in deep sleep, to be more awake the muscles in their throat becomes stronger and the airway becomes held open again. The tonsils move back into their original position and the breathing improves. The problem is that the child has missed out on the really good part of sleep i.e. the deep part of sleep. Effectively it’s the same as someone waking the child every few minutes the result is the child has had disturbed restless sleep and in the morning is over tired resulting in them being very sleepy or over active.

Parents often bring videos of their children asleep to demonstrate the problem and this is very helpful. 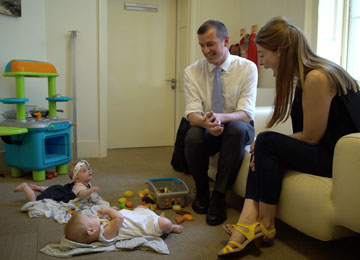